A Bridge Across the Ocean, by Susan Meissner. Berkeley, 2017 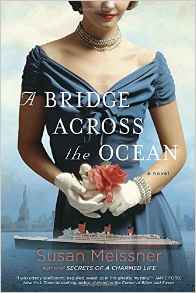 Brette Caslake can see ghosts- she calls them Drifters. This ability runs in her mother’s side of the family, and is creating a problem in her life- she is afraid to have a child, lest it be a girl who inherits the ability. She ignores the Drifters, frightened not of them but of being driven mad like a relative was. So she’s very unhappy when an old classmate calls out of the blue, asking her to use her ability to help him. His daughter, with her mother recently dead, thinks she has found the spirit of her mother. Will Brette go and see, and, hopefully, put the thought to rest?

Reluctantly, Brette agrees. The ghost is supposedly on the Queen Mary, the ship with a varied history: luxury liner; troop transport in WW 2; carrier of hundreds of European women who married Americans during the war and now need to get to America to reunite with their husband; stationary tourist attraction in Long Beach, CA. Brette goes, and discovers that the rumors are true; the ship really is haunted, by several spirits. The little girl’s mother, however, is not among them, but a nameless, formless spirit seizes on Brette and guides her to a plaque stating that a war bride committed suicide. The spirit conveys wordlessly that it wants Brette to investigate this.

There are two other story lines, of two of the war brides; they both take place during WW 2. Simone is a member of the French Resistance after her father and brother are murdered and she is brutalized. While in hiding, she cares for an American paratrooper who was shot. Katrine is British/Belgic, but is carrying a huge secret. Eventually, Simone and Katrine board the Queen Mary and share a room with Phoebe, the one person without a backstory. She serves mainly to draw out Simone and Katrine, and to lighten the mood- not everyone on board this ship has been treated as horribly as Simone and Katrine have been. As they cross the ocean, they share their stories, and Katrine’s secret comes out.

The ending, and also the identity of the spirit that Brette met on the QM, both surprised me. The story itself left something to be desired in my opinion, and I’m not sure what. I’m not horribly bothered by multiple story lines, as long as they aren’t easily confused with each other, and there was no doubting who each section was about. The sections on Katrine and Simone are heart rending. Brette did a good job of sleuthing to find out what happened on the QM, but her character wasn’t very vivid. I couldn’t quite care about her problems. Even Phoebe, who had no backstory, was a stronger character. You’d remember her if you met her; she’s the big cheerful Englishwoman with the child, a woman who wants everyone to be happy. The horror that Katrine and Simone went through keeps this book from being fluffy, even though the ghost whisperer angle skews it that way some. Three out of five stars.

The above is an affiliate link. If you click through and buy something- anything - from Amazon, they will give me a few cents.

Neither of these things influenced my review.
Posted by Laurie Brown at 4:24 PM