The Perpetual Now: A Story of Amnesia, Memory, and Love, by Michael D. Lemonick. Doubleday, 2016 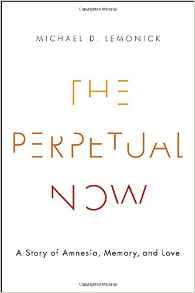 Lonni Sue Johnson was a person of huge abilities. She was a gifted artist who, among other things, created many ‘New Yorker’ covers. She was a skilled and passionate violist. She got her private pilot’s license and had her own plane and airfield. She wrote a newspaper column. She, with a partner, started an organic dairy. When she was interested in something, she flung herself headlong into it and mastered it. She never met a challenge she couldn’t best.

Then she got sick. She ran a high fever with encephalitis. For a while it looked like she wouldn’t live, or, if she did, that she would have severe brain damage, and possibly never wake up. The fever burned out the temporal lobes of her brain- the hippocampus- which is where our memories are made and stored. While she remembered her family, she remembered little else of her past. And she couldn’t lay down new memories- everything that happened to her was forgotten in ten or fifteen minutes. Anyone other than her sister and mother were greeted with “Hello. My name is Lonni Sue; what’s yours?” even if the person has just returned to the room after an absence of mere minutes.

Her abilities, on the other hand, remain intact, although they took time and work to regain. She can play the viola, but her music is deemed emotionless. She can draw and paint, and her passion right now is creating word search puzzles that are embellished with drawings. But… the four page puzzles are never finished. Not a single one. Something makes her give them up before that final page is created.

She has been endlessly tested by neurologists, and has contributed to the knowledge base about the working brain. She charms everyone she meets; scientists and techs love her as a subject and a person.

The book is a combination of personal history and neurology, including information on another famous case of hippocampus destruction, H.M., although in his case, the hippocampus was removed surgically in hopes of stopping uncontrolled seizures. While the book is interesting, it’s not in the same league as other neurology/neuropsychology books like those written by the late Oliver Sacks or V. Ramachandran. There are a large number of pages devoted to Johnson’s family (who dedicated their lives to keeping Lonni Sue as normalized as possible), and to her past that, while they make us closer to her, don’t really advance the story of her brain. It’s an okay book, but not a really gripping one.

Email ThisBlogThis!Share to TwitterShare to FacebookShare to Pinterest
Labels: neurology