The Barrowfields, by Phillip Lewis. Hogarth, 2017 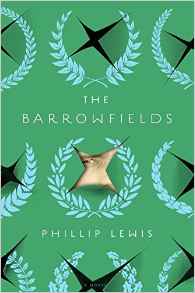 While this story is narrated by Henry Aster, Jr., it starts with his parents and grandparents and the small town of Old Buckram in Appalachia where they grew up. Helton and Maddy Aster were simple, hardworking folks who were dirt poor. The only book Helton every read was the Bible. Henry Sr., was the only one of their children to finish school and attend college. While his desire in life was to read and write, he attended law school, figuring that he should have a dependable income. He never meant to return to Old Buckram, but return he does with a pregnant wife in tow, moving in with his parents, and sets himself up as lawyer. A liability suit unexpectedly makes him a millionaire, and he buys the strange mansion on a hill, a place of steel and glass where five people died violent, mysterious, deaths. Here Henry Jr. spends his childhood, hiking the hills, reading, and over seeing his sister little sister, Threnody. Henry Sr. is an alcoholic who spends his time alone in his study, reading and writing one long novel, absent from the family while occupying the same space. After Henry Sr’s disappearance, Henry Jr. goes away to college, leaving his mother and sister alone. He develops his own drinking problem, and falls in love with a woman who has a family that is even more dysfunctional than his own.

The story is almost totally character driven, and the characters are pretty well done- the males better done than the females. Old Buckram and the house Henry grows up in are almost characters in their own right. The prose is wonderful- it kept me reading into the night. For a first novel, it’s pretty brilliant, but it has its flaws. There is a lack of continuity in places, and the plot is lacking. I would have liked to have known more about Threnody and about Henry Jr’s mother. I am looking forward to see what Lewis writes next.

Neither of these things influenced my review.
Posted by Laurie Brown at 12:58 PM