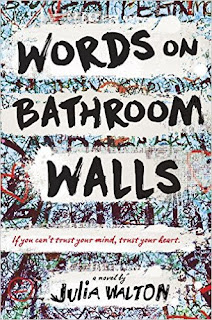 Sixteen year old Adam is starting at a new school. That means making new friends, and then there is a girl who seems interesting. His mother is pregnant by his fairly-new stepfather. Those things would be hard enough for any teen; to make things worse for Adam, he hallucinates. He has paranoid schizophrenia.

He’s on an experimental drug, and it, unlike all the others that were tried on him, is working. Oh, he still sees and hears people who aren’t really there, but this drug has enabled him to know they aren’t real, and so can go about life ignoring them. The mute woman who always seems to be with him, the naked but polite dude, the mobsters- they no longer bother him, even when they try their best.

Part of the deal with the experimental drug is that he has to attend therapy once a week. He refuses to speak to his therapist, so he writes out how his life is going. This is how the book is narrated: his letters to the doctor.

Other than the hallucinations wandering around, the first part of the book is just a normal teen going through life. But as the story goes on, Adam’s worst nightmare starts to come true: his new friends may find out he is mentally ill, broken. Is he strong enough to keep that from happening by sheer force of will?

Adam is quick witted, honest, and funny. I very much enjoyed the narrative. It’s a coming of age story, but one with much higher stakes than usual. I really liked Adam as a character, and I liked his girlfriend and best friend, too. His mother & stepfather love him and try hard, although they had no idea how to help Adam. It’s a fast read but one that made my heart ache.

The above is an affiliate link. If you click through and buy something= anything- from Amazon, they will give me a few cents.