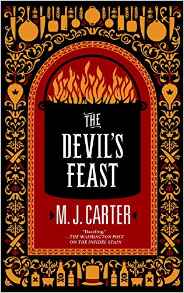 In 1842 London, Captain William Avery finds himself inadvertently drawn into a possible murder investigation. At the end of a fantastic meal by celebrity chef Alexis Soyer at the Reform Club in the chef’s own rooms, one man sickens and dies. At first glance it looks like cholera, but a closer look at the symptoms proves it to be poison. And it turns out not to be the only incident; another death follows, and investigation turns up some possible non-lethal cases of poison before the first death.

Normally Avery’s friend Jeremiah Blake would be leading the investigation, but he’s vanished from the debtor’s prison where he was being detained. Avery worries that he doesn’t have what it takes to solve the case before more deaths occur. And he’s under the gun; in just a few days, the club will be hosting the son of the ruler of Egypt in a fantastic dinner with heavy political ramifications.

This is the third in a series of Avery and Blake mysteries.  Blake is the brainy Holmes of this detective duo; Avery is the Watson who tells the tale. And it’s a fun tale to read if you’re a foodie. Soyer was a real historical person. He was the first chef who become a celebrity; he was not only a brilliant chef, but quite an inventor of kitchen gear and an innovator; he created tools and methods that are still used today. He was a fiend for cleanliness in the kitchen, promoted the use of natural gas for cooking, and encouraged women to become chefs. He also had an oversize personality that made him the center of attention at a time when chefs were becoming stars rather than just unseen food makers. Soyer is the heart of this novel, even more than the murders are.

I loved reading this book, in large part because of Soyer and the research that went into the descriptions of the food and the way it was made. The murder investigation itself seems to take the back seat to the food, however, and I’m not sure if this is desirable in a mystery? I was fine with it, but not sure if every reader will be. There is a lot of time spent questioning everyone from meat suppliers to waiters; there is a surfeit of suspects in these crimes and it becomes a little scattered. I started having trouble remembering who was who in the kitchen. I’ve not read the first two books in this series but this seems like a fun series.

The above is an associate link. If you click through and buy something- anything- from Amazon, they will give me a few cents.

Neither of these things influenced my review.
Posted by Laurie Brown at 11:29 AM