The Poison Diaries, by Jane, Duchess of Northumberland Illustrated by Colin Stimpson. Abrams, 2007 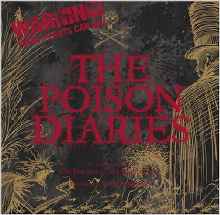 ‘The Poison Diaries’ is a book for children- and adults. The story is short- an abusive apothecary takes on a young boy named Weed as an assistant and puts him in charge of the poison garden- but it works as a fairy tale, has a moral, and is an emotional story. It’s the illustrations that are so marvelous, along with information on the poisonous plants that’s included. As Weed tends the poison garden, the plants take turns speaking to him, telling him their tales and their medicinal and toxic uses- and their hatred of the apothecary. It’s a dark tale, and the illustrations are dark, too- even the brightest pages have a pale gray wash on them.

Some reviewers have said that they didn’t think this would be a good book for children, but I know I would have loved this book when I was in elementary school, and I know a lot of others who would feel that way. It’s in the same vein as many of the tales in the various books of fairy tales; they get pretty bloody and grim and kids love them.

This in no way influenced my review.
Posted by Laurie Brown at 2:14 PM