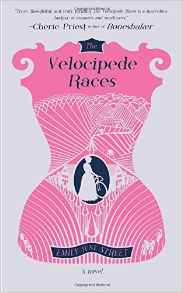 Emmy lives in a world similar to late Victorian England, but in her world, bicycle races are the big thing that men bet on. Women don’t bet, or ride. Or do much of anything. The upper class women are corseted and cossetted, pressed into marriage early and trained only in things like embroidery. Emmy hates this way of life; she wants to ride, like her twin brother Gabriel. Her brother is reluctantly following a career in professional riding; the family is in poverty because of their father’s gambling and few avenues are considered honorable for the upper class. The pittance he earns allows them to eat and purchase the things he needs for his racing; the rest is gambled by his father. Emmy trains in secret, doing the same body building exercises as Gabriel and sneaking out in his old riding clothing to ride. If she was ever caught, she’d be ruined for life.

Emmy’s mother is extremely happy when she catches Emmy and a stranger in a ‘compromising’ position- Emmy almost faints from her tightly laced corset. She’s forced to marry the stranger- who is quite wealthy- with the expectation that she will get him to give her family money and/or sponsor her brother as a racer. But all she cares about is being able to continue to ride, which will be tricky living in her husband’s house. Can she follow her dreams? Can Gabriel manage to support the family?

The book is partly coming of age and partly a feminist tale, with romance and sport thrown in. The subservient position of women is given a thorough going over, with lower class women taking to wearing split skirts to ride to work (something no upper class woman could do) and skipping corsets for “Mod dress” which I assume is like the Rational Dress of our own past. The prejudice against women who ride is intense, just as the prejudice against the women of our world was when they started demanding equal rights.

Emmy is a good character but I wish more time had been spent on the other characters. Gabriel has some depth to him, and there are hints about Emmy’s husband’s past, but that’s about it. I would have liked to have seen more of the women’s rights activists, as well as knowing why the husband did some of the things he did. They are used simply as props in Emmy’s story. While Emmy is a good heroine for the young adult readers, it’s a little hollow.

This in no way influenced my review.
Posted by Laurie Brown at 2:41 PM