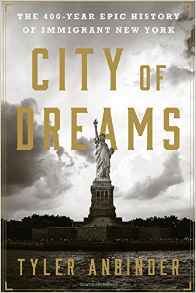 History professor Anbinder, himself a native of New York, traces the waves of immigrants that have built NYC into the behemoth it is today. From Peter Minuit and his deal with the Native Americans to today, the author follows wave after wave of immigrants and how they shaped the city. From the Puritans and fur traders to huge waves of German and Irish immigrants to the Italians, eastern Europeans, Asians, former slaves, South and Central American, and West Indies, all the big movements of people are here. It’s a fascinating read; every wave of people came over hoping for more opportunity and a new life. Nearly all faced prejudice of the already ensconced people, horrible living conditions, and endless hard work. They bore this steadfastly, all in the hope that their children would have better lives than they had.

This is not your boring history book. Anbinder frequently uses personal accounts to bring vivid life to the past. While this is a massive book- nearly 600 pages with another 100 of end notes, bibliography, appendices, and index- it was as gripping as a well-written novel. Here’s the Irish fleeing the famine, arriving as stick figures. Here are the people trying to take advantage of new immigrants. There were some parts that were less interesting to me- the section on the Civil War, for instance, because I never find war interesting- even those I read every word of. That is a first for me; I tend to skip the bits about fighting.

Every wave of immigrants seemed to follow the same routine: take the first jobs they could get, always the things natives (and previous immigrants) had risen above. They work 7 days a week (except for the Jews, who mostly didn’t work on the Sabbath). They live in cramped quarters. As soon as they can save the money, they start a business of their own. They also send amazing amounts of money back to their home countries, whether it be to support parents or to bring over other family members. They become citizens as fast as possible most of the time, unless they are hoping to make enough money to have a business in their home country. They almost always dislike the next wave of immigrants, feeling that next wave has a criminal element to it. Humans have remained the same for the 400 year span of NYC; they are filled with prejudice.

Excellent book; should be required reading. It’ll enlighten a lot of folks who want to build a wall.

Neither of these things influenced my review.
Posted by Laurie Brown at 5:07 PM