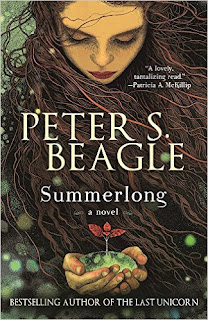 This novel has some of the most beautiful prose. Everything is described with loving detail; I could smell the spring in the PNW and feel the damp air. (of course, I have been in the Pacific Northwest enough to have a head start on that, but still) Early in the book I started caring about the characters.

Joanna Delvecchio is the head steward on a regular Seattle/Chicago run, and counting the days left before she can retire. She’s had a 20-some year relationship with Abe Aronson, retired history professor, which she refuses to admit is a relationship. Her daughter, Lily, can’t seem to find the right woman. It’s a nice life, with great regularity to it. When they meet the new waitress at their favorite little restaurant, she rocks the lives of all of them.

Lioness Lazos, needing a place to stay, moves into Abe’s garage. She has nearly nothing and is fine with that. She is hiding from someone and traveling lightly. But things start changing the minute she arrives. Abe and Del start living out their dreams apart from each other. Lily falls in love with Lioness. The neighbor kids learn how to produce flowers from bare soil… instantly. Spring comes early and lasts all summer and fall.

It’s obvious pretty quickly that this is not your average novel but a fairy tale. I figured out who Lioness really was pretty quickly. While I knew what would have to happen with Lioness, I did not expect what she would do before giving in to it. And I do know *why* she did it. That’s one of my quibbles with the book: Lioness is a cypher. Everyone loves her on sight, but she does little and says little. Of course she’s a magical being, but still. She’s interacting on a human level, so I expected more humanity from her. She had to know that what she did would destroy Abe and Del’s relationship; did she think she was doing them some sort of favor? Or did she just not care, and was indulging herself? The ending left me angry at her and at Abe.

Still, even though I was not happy with the ending, I enjoyed most of the book too much to not like it as a whole. It was a magical read and I rushed through it, not wanting to stop reading. I guess I just expected a happy ending from a fairy tale like this!

I received my copy of this book from Net Galley for free, in return for a fair review.

Neither of these things affected my review.
Posted by Laurie Brown at 4:14 PM