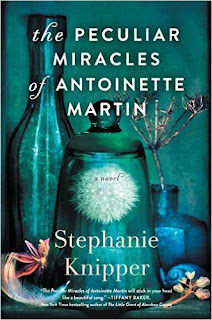 I love magical realism, and this book had the bonus of being set on a flower farm, so I jumped at it. Sisters Rose and Lily were very close as girls and teens, but when Rose’s unexpected pregnancy while in college led to the birth of a daughter on the autistic spectrum, Lily couldn’t deal with it. Having OCD with some aspects of autism herself, Antoinette was all her fears in human form: unable to speak, difficulty with movements, repetitive behaviors. It all reminds Lily of her own problems that made her constantly bullied at school, and in her mind threatens the ‘normal’ life that she’s built in the city where no one knows her. Lily and Rose haven’t spoken in years. But that has to change now: Rose has end stage heart failure, a complication of her pregnancy with Antoinette. She needs someone who will take care of Antoinette and her only option is Lily. Complicating their reunion is the ‘boy’ next door, Seth. He and Lily used to be an item, until he broke it off to go to seminary, breaking her heart. He dropped out and bought into the flower farm. Then there is Lily’s next door neighbor in the city who flirts constantly…. Also, Antoinette has this ability to restore wilted flowers and temporarily heal anything from birds to broken human hands.

I enjoyed the story, in large part because of the setting (at the nursery/flower farm) and the growing relationship between Lily and Antoinette. Lily is able to help Antoinette with some of her problems, having faced similar herself. The physical setting is described beautifully- the gardens, the lavender fields, the farmer’s market – although I do wonder how two people keep that many acres weeded and harvested alone. Where are the workers? But the story is like some fairy tale, where no one has any flaws (other than physical health problems). Seriously, everyone in this story is honest, giving, hardworking, pleasant natured, and just plain good people. I find it hard to believe in a town where *everyone* is this great! The ending is rushed; in fact, the whole story is in a way. A lot happens in a very short time. The ending also lacks an explanation; we are left guessing as to how Antoinette works her miracles and why one character makes the choice he does. I’d give the story four stars out of five.

The above is an affiliate link. If you click through and buy something - anything - from Amazon, they will give me a few cents.