The Six: The Lives of the Mitford Sisters, by Laura Thompson. St. Martin’s Press, 2016 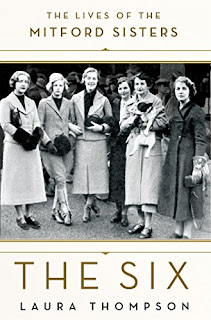 “The Six” is a joint biography of the six Mitford sisters, who came of age during the years between world wars; some of them were part of the Bright Young Things set. It was a dysfunctional family, full of jealousy and just plain oddness. Born to the British aristocracy, their father managed to fritter away a fortune. Their upbringing and education was rather haphazard- some went to school, some didn’t. They were mostly quite bright. They were also beautiful in the northern way; blond, blue-eyed, and fair of skin. There the similarities end. One realized right away she’d have to support herself and wrote scathing comedies of manners, based largely on her family. One became a fascist; in order to outdo her, another became a close friend of Hitler (in fact, several family members were introduced to Hitler and considered him perfectly nice), yet another became a Communist, one stayed in the country and raised animals, and one married a Duke and ended up running the manor house as a business, quite well, too.

They had shifting alliances and enmities. Scandal dogged them, from both political and sexual/marital reasons. Diana left her wealthy husband for the head of the British Fascist party, eventually ending up in prison for three years after WW 2 started. When England declared war on Germany, Unity shot herself in the head. She lived, but was severely handicapped and her mother cared for her until she died of a brain infection from the bullet that could not be removed. Jessica (author of “The American Way of Death”), the Communist, for some reason could not see that Stalin was just as bad as Hitler. Nancy was friendly with Diana after she was released, but refused to introduce her to her friends. Some rifts weren’t healed until Nancy was dying.

I found the book confusing at times, trying to remember which sister was which (I’m terrible at remembering names). I think I was halfway through before I got it all straight. Naturally, most of the book concentrates on Nancy, Diana, and Unity, with Jessica making some appearances. I actually found the politics fascinating, how fascism was treated as just another viewpoint until the war started. It made me think of what’s going on now a bit, the casual way racism is accepted by so many. It’s a good book if you are interested in the 1920s-1930s, the upper class of that time, or the politics.

I received this book free from Net Galley in exchange for an honest review.

Neither of these things influenced my review.
Posted by Laurie Brown at 5:51 PM