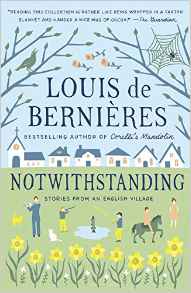 ‘Notwithstanding’ is the name of a mythical English village, the name picked because the village life is notwithstanding. A set of interconnected stories show us the lives of the various village eccentrics as their way of life dies off. Some have the feel of fairy tale or fable; others are vignettes. Several characters show up multiple times; the most common is the boy Robert, who rescues and rehabilitates injured and orphaned birds, including a talking rook named Lizzie, and catches a legendary pike. Among the other villagers are the widow who goes everywhere with her husband’s ghost, the aging general whose mind is slipping and now goes to town with no pants on, a woman who realizes she’d best try and get on with folks, a Sixth Sense style ghost story, a maid who is seduced by her employer’s son, a ghost who summons the Rector, and more. The thread that binds them together is the erosion of village life by new people; people who complain about roosters crowing in the country, about ponds that aren’t fenced off, and the like. It’s nostalgia (de Bernieres grew up in just such a village and is most likely Robert) and it’s sweet in places, sad in many places, and funny in others. I don’t tend to go for ‘sweet’ or ‘cozy’ books but this one hit me just right.

Neither of these things affected my review.
Posted by Laurie Brown at 3:42 PM