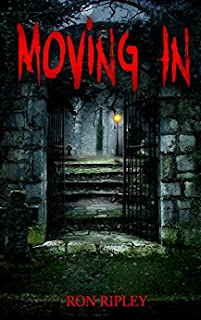 After Brian has a heart attack before age 40, he and his wife Jenny move to the peaceful countryside to escape the stress of the city. He has reduced his workload and arranged to work from home; Jenny has a job in the new location. But peace is not what they find; immediately, Brian finds the basement door opening itself every time he closes- and latches- it. Then a dead body is found on his property. Next an invisible entity starts pouring him drinks in the kitchen, as if to say “Here, you’re going to need this!” Problems accelerate from there, as he finds a graveyard hidden in the basement and an evil entity in the barn. Things get worse from there, and a couple of psychics join the fray.

This is short for a novel. I had high hopes at first, with the opening doors and spooky things. But things moved extremely fast; too fast, really. Soon there are so many people, dead and alive, that it’s hard to follow who is who. While there is tension and danger, things get resolved a little too easily- although not without losses. This is the first of a series, and it has the flaws that a lot of introductory stories have. The characters aren’t developed at all, but they have some promise. It kind of reminded me of old pulp stories, really, which isn’t really a bad thing.

The above is an affiliate link. If you click through and buy something- anything- Amazon will give me a few cents. This did not in any way affect my review.
Posted by Laurie Brown at 3:28 PM