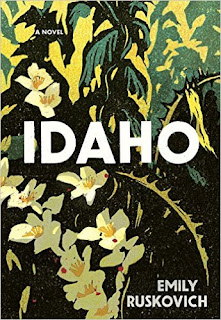 Ann and Wade are married and living on a hill in rural north Idaho. It’s Wade’s second marriage; he was married to Jenny until she killed their younger daughter and the older one disappeared. Then she went to jail and they divorced. Ann had had a crush on Wade ever since she was teaching him piano, in the school where she worked and taught the local children, including Wade’s daughter. He took piano up at his age because he’d read that learning music could stave off dementia; his father and grandfather had both developed early onset Alzheimer’s.

Shifting around in time and point of view, I found the book a little difficult to follow. There are some dead ends, too- characters who are introduced but then disappear or have only incidental importance to Ann, Jenny, and Wade’s story. Ruskovich evokes the landscape of north Idaho perfectly; I live in one of the towns she mentions and know the area well. She’s got the trees, animals, and way of life down well.

We get to know Ann well; I would say she’s the main focus. Jenny remains a cipher; we see her in prison but we never find out why she did what she did. Wade sort of drifts through the story, living in an increasing fog of forgetfulness. The most vivid character is Elizabeth, Jenny’s cell mate.

The story touches on relationships of all kinds- maternal, sibling, marital, friends, exes and second wives- and mostly on memory. Memory and forgetting doesn’t just affect Wade, but everyone around him, just as memories of their deeds plague the prison inmates. It’s a fascinating read, but not a comfortable one, and it would have been nice to have some loose ends tied up. But loose ends don’t always get tied up in real life, and this story is uncomfortably real.

The above is an affiliate link. If you click through and buy something- anything- from amazon, they will give me a few cents.

neither of these things influenced my review.
Posted by Laurie Brown at 4:53 PM