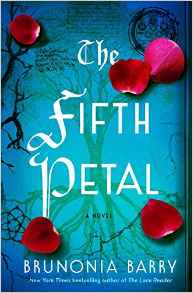 When a teen aged boy dies while harassing a mentally ill, homeless woman, she is suspected of killing the boy, even though he doesn’t have a mark on him. She was, after all, implicated in the deaths of three young women 25 years before and the disappearance of one other on that same night; crimes that were never solved. The only witness was Callie, the five year old daughter of one of the women, and she was long gone, raised by nuns and in foster care. Now she’s back, having only now learned that Rose Whelan – “Auntie Rose”- is still alive after all, and in jail. She intends to get Rose released into a safe situation.

Her return to Salem is made amazingly easy. The police chief’s wife gives her a room in her house. The richest family in the area makes her welcome, inviting her to Thanksgiving and ultimately having her move in there. There is, of course, a romantic interest. Meanwhile, the chief has reopened the unsolved murders, hoping to finally clear Rose, who spends her time drawing and talking to trees in an attempt to find the tree where some women were hung back in the witch hunt days. Some of the witches who run stores make appearances. There is an old sea cave that bootleggers used in the 20s, and an island that is a shelter for abused women. Callie is healing people with sound, and takes a trip to Italy before the books conclusion. The slain women from 25 years ago had some kind of sex cult going on. There is more going on in this book than you can imagine.

And that’s the problem. There is *too much* going on. It’s distracting, and some of it doesn’t advance the story at all. For example is the trip to Italy; I kept thinking there might be a tie-in between the ancient caves used as churches and the rituals of the slain women, but there wasn’t. It’s a large red herring. The sanctuary for abused women is another side track that has nothing to do with the mystery. Now, if these plot lines developed the characters or something, I’d feel differently. But they didn’t. There is also the problem that I doubt very much that the wealthiest family would invite the daughter of a woman who many thought was a complete slut to move right into their house! There is a lot of extraneous material in the book. But in the end, I enjoyed the book. I couldn’t put it down; it just kept drawing me in. The descriptive passages are brilliant. The characters could use a little more depth. I love the author’s vision of Salem; I have no idea how accurate it is, but it’s wonderful with its casual acceptance of the magical population. Despite its flaws, I have to give this book a solid 4 ½ out of 5 stars.

The above is an affiliate link. If you click through and buy something =- anything- from Amazon, they will give me a few cents.

Neither of these things influenced my review.
Posted by Laurie Brown at 2:10 PM