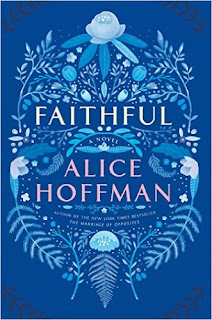 Shelby Richmond was behind the wheel the night of the accident that put her best friend into a permanent coma. Helene continues to exist, and for some reason people thing being in her presence can perform miracles of healing. People crowd Helene’s house, with her parent’s admitting them in lines. Shelby, on the other hand, is alone. She retreats to the basement, shaves her head, doesn’t speak, and attempts suicide. The only friend she has is the boy who she buys weed from, and she doesn’t consider him a friend. She doesn’t consider herself worthy of having a friend. But for some reason she follows him when he goes to pharmacy college, and slowly comes out of her shell, getting a job cleaning cages at a pet store. Unwillingly, she forms a friendship with a co-worker, even having the co-workers children- Shelby hates children- dumped on her one long weekend. Meanwhile, throughout this time, from accident to the end, she receives mysterious postcards with art on them and brief statements: Say Something, Be Something, See Something, Believe  Something.

Saddled with major depression, PTSD, insanely low self-esteem, and survivor guilt, Shelby is a mess at the beginning of the story. She grows slowly through the years, but she goes grow- life sort of forces itself on her. Even though at times I wanted to shake some sense into her, it was beautiful to watch her spirit unfold. Of course she makes mistakes- we all do. It’s a coming of age story, albeit slightly delayed as she finds out who she really is. Hoffman almost always writes stories that I can’t put down, and this one was no exception.

Neither of these things influenced my review.
Posted by Laurie Brown at 1:29 PM