The Book of Esther, by Emily Barton. Tim Duggan Books, 2016 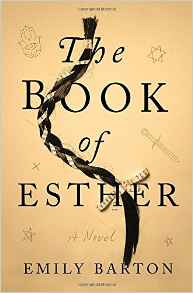 “The Book of Esther” is an alternative history, fantasy, kind of steampunk (except the motive technology is gasoline driven instead of steam- petrolpunk?), Jewish Joan of Arc, gender bending, coming of age story. And I’m sure there are some bits I’m forgetting there. Oh, yes, there is a quest and a clash of armies.

The story has a lot going for it. It’s around 1941, when, in our history, Nazi Germany attacked Russia. In this world, the Germania is making a push to take over the Khazar kaganate on the way the Rus. Every country seems to have its own technology; the Germanii have fixed wing monoplanes and tanks, while the Khazars have mechanical horses and biplanes. The Uyghur, who control huge oil fields and seem to be run mafia style, have mechanical horses and air vehicles which have flapping wings and are pedal powered. And the mystical Kabbalists can make golems. Oh, and there are werewolves.

Ester, the 16 year old daughter of a high ranking official in the capital city of Atil, has lived an easy life. There are servants and even slaves to do the unpleasant work. She can easily take the best mechanical horse from her father’s stable and go riding, even though it’s not actually allowed. In two months’ time she will be married to the chief rabbi’s son, which, despite the marriage being an arranged one, does not displease her.  She finds the boy attractive and pleasant. But during a visit to the huge refugee camp that surrounds Atil- the refugees have been fleeing as the Germanii advance into their countries- Germanii planes fly over, taking pictures of the city and its defenses. Her whole life and focus change at that point; she must do everything she can to help defend her country. Even though her father shushes her away to her room when she has told him what she saw. And, because of the rules of her state/religion say a girl can’t fight (or do a lot of other things), she decides she must become a man. The only way she can imagine for this to happen is to go to the Kabbalists.

This is already a long review, and that just gets us through the set-up. In the first few pages, the author has to set up the alternative history, the religion (a type of Judaism), the family dynamics, and the technology, so it’s a pretty dense read. And things don’t get any easier as we go. It takes 100 pages to get to the village of the Kabbalist, and it’s only a two day ride on the mechanical horse. Things don’t speed up after that point. It’s a rather slow read, because while there is always something happening, it’s frequently people talking about things like ‘Do golems have souls?’ or if it’s all right that her little brother is also her slave, or whether Esther wants to marry her fiancé or make out with the Kabbalist who accompanies her back to Atil, along with her army of golems, refugees, and Uyghur mafia types.

I was fairly glued to the book, but I also found it irritating in its slowness. I like Esther because, while her initial quest is not at all thought out, she does it for the right reasons. It never seems to occur to her to simply disguise herself as a boy to join the fighting; her trust in her religion says she has to be a man, so a man she will become. The other characters don’t seem developed at all. There is a whole lot of ‘stuff’ but no three dimensional quality to it. And I’m not sure if this is the first of a series or not; the ending is totally unsatisfactory as nothing is resolved in any aspect. I kind of hope it’s a series and the author can flesh out these people and resolve some of the philosophical questions they’ve raised, because they’ve been left in a mess.

Neither of these things influenced my review.
Posted by Laurie Brown at 4:26 PM