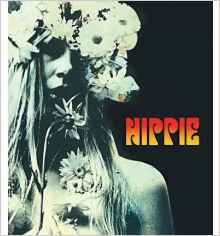 Barry Miles knows about what he’s written about here; he lived it. From the Beat culture of the 50s to New Wave and Punk, he was there. The title is misleading in a way; while it’s about hippie culture, it is also about the Beats, Black Power activists, the start of Gay Pride, and musicians- lots and lots about the musicians; people I tend to think of as separate entities from the peace, love, pot, and granola hippies. Of course not all hippies were dropping out; many *were* activists; there is no hard line that says “This is a hippie and this is not”. But it’s more a history of the era in general than about the entire hippie movement.

I found it very interesting; while I lived through the era I was just a little too young (and too much of a book nerd) to participate in much of it. This book illuminated things that I saw from the edge looking in. The book is visually very appealing; there are very few pages that don’t have images on them. Photos, album covers, and posters are all part of the imagery. It’s like a coffee table book, but with smaller dimensions.

The book doesn’t beautify the hippie scene. He writes about both the good (peace demonstrations, the Diggers, wild fashion, hopes for a more egalitarian future, Woodstock, activism) and the bad (hard drugs like meth and heroin, the Hell’s Angels moving in on the scene, Altamont, Manson, Kent State). It’s a very even handed approach. Now, I think I need to go listen to some 60s music.

The above is an affiliate link. If you click through and buy something- anything- from Amazon, they will give me a few cents. This in no way influenced my review.
Posted by Laurie Brown at 3:09 PM