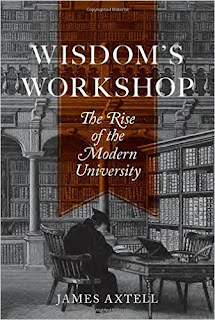 Axtell starts his history with Cambridge and Oxford (“Oxbridge”), with English colleges mainly training men for the clergy. Later they became places where the aristocracy sent their sons so that they could find jobs as diplomats or other government posts. From there he goes to the very first college in America, created to educate men for the clergy. Grammar schools proliferated in America right before the Civil War, creating people adequately educated to go to college. He follows the change of colleges as places of rote learning and religious instruction into places that encouraged exploration, experimentation, and research rather than memorizing scripture. Colleges expanded across the USA and became universities that were expected to turn out new findings and technology. The land grant universities are given merely a quick nod. The world war and the GI Bill changed the faces of the universities, as adults filled colleges rather than teenagers.  The universities turned into tools of the government, turning out weapons along with economists, scientists, and future legislators.

The book is what it says it is; a history of the universities, with heavy emphasis on the USA. It’s very detailed but pretty dry. I would have liked to see what universities, like Cambridge and Oxford, in other countries had turned into as the ones in the US matured.  Sure they have not stagnated for three hundred years. What about the German system that attracted so many students from the US in years before the American system got going? Interesting book but very specialized.

The above is an affiliate link. If you click through and buy something - anything- Amazon will give me a few cents. This in no way influenced my review.