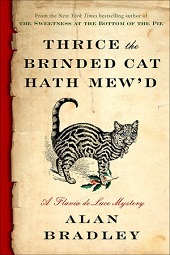 When I ordered this book, I somehow managed to miss something in the description. Mainly that the protagonist, Flavia de Luce, was a tween girl. I also thought it was set during the Victorian era for some reason, when it’s actually in the 1950s. While I caught on to Flavia’s age quickly- although she’s quite precocious and mature- the language used continued making me think it was further in the past than 1950. Still, once I caught on, I was okay.

Flavia is returning home to England after a semester at a school in Canada- after being kicked out of the school, I should say. It seems that Flavia has a habit of getting involved in mysteries. This time, running an errand for the vicar’s wife, she finds a dead body hanging upside down on the back of a door. This keeps her occupied for a couple of days, which is good, because her father is in the hospital with pneumonia, and the family is being told to stay away. Flavia pretends to be a writer, is on the move constantly, meets with people who are not what they claim to be, and finds herself having to deal with a person with genuine mental illness. Flavia is resourceful and lands on her feet every time. I ended up really liking her, but I need to go find the earlier books in the series to find out what is up with her family. They almost don’t exist in this story, and her mother’s decision to leave her estate to Flavia instead of either her husband or the older sisters seems odd. The ending threw me; while it looked like it was heading that way all through the story, it still didn’t seem right. Why something so important is shuffled to the edges of the story I don’t know. Flavia is shown as doing pretty much whatever she wants; why did she not go to the hospital to see her father? Perhaps the earlier books will tell me. Still, it was an entertaining story and I liked Flavia and some of the characters who had enough of a part to seem real.

Neither of these things altered my review in any way.
Posted by Laurie Brown at 12:55 PM