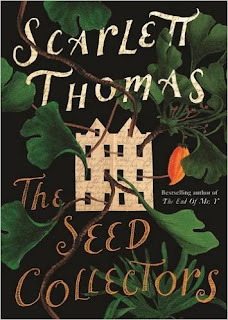 “The Seed Collectors” anchors on a mysterious plant on a mysterious island that can only be accessed by helicopter (how then are there aboriginal people there?). The plant makes seed pods that carry the gift of enlightenment- and death. That’s the other problem- since the person dies to become enlightened, how do other people know about the enlightenment? But this part is magical realism, so I put those questions aside and went along for the ride.

The Gardener family lost several members of one generation on a quest for this mysterious seed pod. They disappeared, never to be seen again. Oleander Gardener, great aunt to numerous other Gardeners, has died and left her considerable money, a fancy spa retreat, and other blessings, mostly to Fleur Meadows, who, as far as they know, is no relation to the Gardeners at all. She also left to her nieces and nephews seed pods of that very same mysterious plant. And then there is the book, which turns into whatever book the possessor needs at the time.

If ever there was a family in need of enlightenment, it’s this one. Incest, overeating, compulsive spending, alcoholism, anorexia, and infidelity, are all on the menu. The POV bounces from one family member to another. There is no character who is truly likable; on the other hand, none are truly detestable, either. Bryony is lamentable and wholly self-centered, but she, like them all, is just a person stumbling through life. Did the loss of the one generation cause this one to be this way? That is never answered.

The story lurches around not just in POV but in time, too. There are parts where I have no idea who the narrator is writing about. But somehow, despite these problems, the book was oddly enjoyable and at no point did I consider not finishing it. The prose is beautiful. The people are interesting. The situation is unique. It’s literary fiction at its strangest.

This in no way influenced my review.
Posted by Laurie Brown at 3:48 PM