High on Rebellion: Inside the Underground at Max’s Kansas City, by Yvonne Sewall-Ruskin. Open Road, 1998, re-released 2016 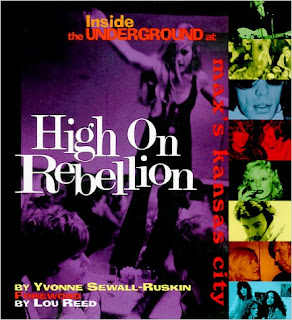 Max’s Kansas City sounds like a name for a steak house, and up front, that’s what it was. On the first floor in the front area, they served surf and turf and had a well-stocked bar. But it was a lot more than that; it was ground zero for the changing arts and music scene of the 1960s and 70s and saw the birth of glam and punk. Owner Mickey Ruskin liked artists, and the club became their hangout. If he thought their work had promise, he’d let them run up unpaid tabs or take artworks in lieu of payment. Soon Andy Warhol, the Velvet Underground, and the Factory regulars were ruling the arts scene from Max’s back room; the drag queens were welcome there when they weren’t in many other places. Lots of musicians started coming in, and it soon became a place where anything could- and did- happen. Sex and drugs in the bathrooms, peeing in the phone booths because the bathrooms were taken, blow jobs under the tables, fights, and waitresses in crotch high skirts were all common. Beat writers were there. Amazing new music started showing up as well as visual art; Bowie, Springsteen, Bob Marley and the Wailers, Aerosmith, Tim Buckley, Iggy Pop, Patti Smith (both she and Janis Joplin would be turned away at the door the first time they showed up, Ruskin saying they were too dirty), Alice Cooper, Lou Reed, and the New York Dolls were all there regularly- Debbie Harry was a waitress there before achieving success with Blondie. Ruskin had a talent for working the door; he could sense who would fit in and who wouldn’t, and would turn lots of people away. It was high art and low life, and it was deeply mourned when it closed down because of the debts Ruskin had and his increasing drug use. Everyone spoke highly of Ruskin, even though he was an anti-Semite, a bigot, and a misogynist.

The story is told in snippets from all sorts of people who’d been there. Everyone from Lou Reed to Ed Koch to Halston to ex-waitresses to Abbie Hoffman to Holly Woodlawn have short bits of recollections in the book. It’s all loosely held together by memoirs of Yvonne Sewall-Ruskin, a former waitress who ended up marrying Ruskin and having children by him. There are lots of photos. I found it mostly an interesting, if uneven, read although I did get bored a couple of times. Given my interest in pop culture I’m not sure how I got to be this old without knowing about Max’s.

Neither of these things influenced my review.
Posted by Laurie Brown at 1:33 PM