The Mistresses of Cliveden: Three Centuries of Scandal, Power, and Intrigue in an English Stately Home, by Natalie Livingston. Ballantine Books, 2016 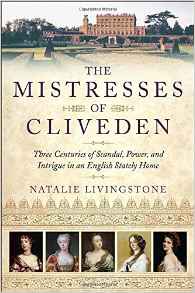 Cliveden is a huge house that, when first built, seemed to be way out in the country but extremely easy to get to from the English capital via the Thames. While it existed before 1666 (as a hunting lodge), it wasn’t until that date that the Duke of Buckingham bought it and began extensive renovations, making it into a truly grand house. Since that point, it’s been a home to the Duchess of Buckingham, a Countess, another Duchess, a Princess of Wales, and an American who was the first woman to sit in the House of Commons. It was the site of the beginning of a government scandal. It’s not been a cherished family home passed down through generations; it’s been sold many times, burned down multiple times, and now is owned by a company that runs it as a hotel.

What Cliveden is in this book is the spine that holds together the biographies of five women. The first section is a bit odd, as it’s not so much about the Duchess of Buckingham but the Duke’s mistress, Anna Maria Talbot the Countess of Shrewsberry. He actually bought Cliveden so they could live together there; scandal and legal proceedings drove them apart and Anna Marie never lived there. The Duchess became the first mistress of Cliveden as a manor house.

The lives of all of the mistresses of Cliveden- ‘mistress’ in the sense of being the lady of the house, not, except for Anna Maria, a lady kept on the side-  are inextricably twined with the Royal Family and the government. One was the best friend of Queen Victoria; another would have been queen herself had her husband not died prematurely. A fair bit of the book is not about the lives of these women, but about the government and the royals, because that is what influenced them the most. Those were the sections where it bogged down a bit for me, but the history is pretty necessary to understand the lives of these women. The story is well written and interesting, and, thankfully, comes with a cast of characters at the front of the book, or I would never have been able to follow who was who.

I find it odd that the author, who is the wife of the current owner of Cliveden-well, he owns the company that owns Cliveden- doesn’t have anything in the book about herself and her journey to Cliveden. She is, after all, the current mistress of Cliveden.

I got this book free from the Library Thing's Early Reviewers program, in return for an unbiased review.

neither of these things influenced my review.
Posted by Laurie Brown at 6:33 PM