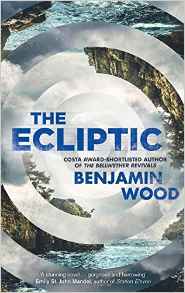 The ecliptic is the path the sun *seems* to follow across the sky during the year. I say ‘seem’ because in reality, the sun does not revolve around the earth; it’s an illusion humans have that the sun revolves around them. Humans are good at thinking things like that, whether they are thinking about the universe or their personal situations.

Elspeth Conroy is an artist; she came from a working class Scottish home, rather forced her way into art school, and accidently became a star of the art world while still quite young. But now she is stuck… the art she makes is commercially successful, but, she feels, it is without soul. To make matters worse, the man she loves, her mentor, has disappeared. After a fair amount of time, she is reunited with her mentor, and, she is offered a chance to go to Portmantle, a very private retreat for artists who have lost their inspiration. Hidden away on an island in the Sea of Marmara, the artist goes in utter secrecy, telling no one and communicating with no one, to a place where there are few responsibilities or distractions, where they can strive to complete their next great work. She spends a decade there, before the arrival of a teenaged boy upsets the colony- and especially her.

Elspeth (“Knell” on Portmantle) has been (she feels) a failure in both love and art. What will it take for her to succeed in one or both of them? While I felt that the love issue was minor compared to the art issue, it’s still an important impetus for Elspeth’s actions. The novel examines the artistic process and questions where inspiration comes from. One thing I found interesting- and haven’t figured out the meaning of yet- is that in both of Elspeth’s artistic breakthroughs an almost mystical substance is a part of them. Her first breakthrough comes when her mentor/lover finds a cache of old Ripolin, the first oil enamel made for house painting. Apparently, artists used it for a while; Picasso used a lot of it. The second time, years later, her artistic block yields to bioluminescent fungi, dried, ground, and mixed with oil. I found it humorous that she also ground her anti-depressants up and used them as paint- that one was pretty obvious.

The prose is beautiful and rich; Elspeth, however, sounds like a much older woman than her actual age. I was a good way into the novel before I realized what her real age was. Did she learn to tell her story so elegantly in art school? Is she telling her story from a much later date than it took place? I’m not complaining; the book was a joy to read, with descriptions like jewels. It’s a long book- nearly 500 pages- but I didn’t want to put it down.

Neither of these things influenced my review.
Posted by Laurie Brown at 4:19 PM