The Geography of Nowhere: The Rise and Decline of America’s Man-Made Landscape, by James Howard Kunstler. Touchstone, 1993 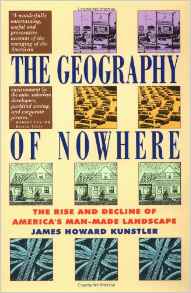 This very interesting book looks at city planning and architecture, and how they have both failed to produce cities that people actually want to live in, and that are sustainable over the long run. He hates suburbs and shopping malls and big box stores; most of all, he hates privately owned automobiles. He likes small towns. He likes mixed use areas. He likes public transit.

I agree with him on almost all these things. Kids in suburbs are kind of trapped with no place to go unless mom drives them. There is no corner store or movie theater a few blocks away they can walk to. If you need a carton of milk when you live in one of those developments, you have to get in the car and drive to the nearest shopping center, which sits in a sea of parking spots. Because stuff is so spread out, public transportation won’t pay for itself, and no real community is built between people.

Modern zoning doesn’t allow mixed use- there are no apartments over little stores so people can live close to a job. There are no small factories in between eating places and stores. When faced with undeveloped or farm land, planners think to preserve the rural feeling by making building plots of 5 or 10 acre minimum, but this doesn’t work. It’s really hard for a farmer to keep using that 5 or 10 acres when it’s fenced off from other plots, and is bisected by a driveway, and has a house in the middle with a lawn and garden. We face that where I live; owners want their 5 acre lots hayed but farmers find the odd shaped plots that are left after people build too difficult to maneuver cutting and baling equipment in. It’s green space, but it’s not feeding anyone anymore. And it’s not green space that the public can use, either.

Written more than 20 years ago, Kunstler’s observations are still valid. Nothing has changed other than that we’re even closer to running out of fossil fuels and urban slums are getting bigger. Municipal buildings and shopping areas are still ugly. More suburban developments have been built. More big box stores have run small business out.  The problem with the book are two things: one, the author presents few solutions although he does show a few; and, two, he’s a bloody snob. He puts down the majority of the population as not having any taste or class; he makes statements about the poor that make me, a poor person all my life, wish I could have a few harsh words with him. But despite these things, I feel his book should be required reading for anyone going into architecture, city planning, or being a small town/county politician. What he points out should be obvious, but people just don’t see it because they are so used to it. There *are* options to the way we live today.