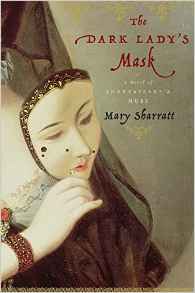 I greet a new Mary Sharratt novel like I would someone who brought me 5 lbs of See’s Candy and the news that I was no longer a diabetic. In this novel, Sharratt takes on the story of Aemilia Bassano Lanier, the woman who may have been Shakespeare’s Dark Lady; the story is definitely up to the author’s usual standard.

Lanier was the first Englishwoman to be a professional, paid, poet. This, and running a short lived school for girls, was how she made her living. The cost of publishing her writing was paid by female patrons. This secured her place in history, whether or not she was Shakespeare’s muse or lover. Sharratt takes Lanier from girlhood to midlife. Her life was not easy; she frequently faced poverty. The laws of the day left women totally at the mercy of the men in their lives, and, of course, everyone was at the mercy of disease.

Aemilia was luckier than most; after her father’s death, she was fostered with a rich woman who felt all girls should be well educated. That didn’t save her from becoming mistress to the Queen’s half-brother, or from an arranged marriage to a man who drank too much and lost money constantly, though, or from having her affair with Shakespeare end in an ugly way. She is a very strong woman, though, who tries to keep the reins of her life in her own hands and succeeds as much as any woman of the time could have. In her young days, she frequently dressed in male clothing, hiding her sex to gain the freedom to go where she wanted and do as she wished. As the daughter of a hidden Jew, she also had to hide her very dangerous heritage.

I thought this book was wonderful, even though it left me feeling that Shakespeare may have been a bit of a jerk. She gives life to Aemelia in her good times and her bad. Sadly, the other characters are not nearly so well fleshed out; the focus is all on Aemilia. But the people in the story, many of them historic personages, are still enjoyable. My favorites? The three Weir sisters who work for Aemilia- who are herbalists, and perhaps more.

Neither of these things influenced my review.
Posted by Laurie Brown at 4:10 AM