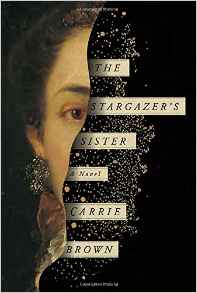 Caroline Herschel did not have an easy life. She caught typhus as a child and it both stunted her growth and left her with facial scars. She knew she’d never marry, and thought she had no future but to continue as a household slave to her exhausted, constantly pregnant, and deliberately cruel mother. Thankfully for her, her elder brother William responded to her letter which just said “Save me” and brought her to his home in England to keep house for him, train as a singer, and aid him in his astronomical endeavors. Lina became indispensable- or so she thought. After years of serving William in all aspects of his life - being both housemaid who cleaned the chamber pots and scientific assistant who devoted every hour to his comfort- he suddenly married a rich, young, widow and Lina was unceremoniously removed from their shared house. But her accomplishments- she discovered several comets and was the first woman to be paid by the Crown for doing science-secured her place in history, despite being overshadowed by her brother.

Brown writes in the third person but always from Lina’s point of view. She presents us with a woman who works until she is bone tired but continues anyway because the work simply must be done- as well as because she is fascinated with astronomy. She also loves her brother, almost to an unnatural degree.  She takes his marriage as a great betrayal.

The writing is lovely in most places; the descriptions of dwelling, life, and work are detailed and wonderful. Life was hard back then, and Brown makes us feel every over-worked muscle. But Lina’s life had beauty as well as endless toil; the night sky in all its brilliance was hers to explore. I really enjoyed the book, except for a couple of places where Brown deviates too far from the historical record. A novelist must invent events that fit into the historical record- and Lina left extensive journals. But the author invents a big event that never happened, and excludes someone who existed from the story; not by merely ignoring the person but by explicitly stating that no such person lived. I knew enough about the Herschels that this irritated me. Still, it’s a very good read.

The above is an affiliate link. If you click through and buy something- anything- from Amazon they will give me a few cents. This in no way influenced my review.
Posted by Laurie Brown at 6:01 PM