Why the Grateful Dead Matter, by Michael Benson. ForeEdge, 2016 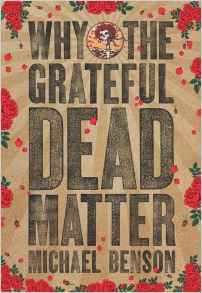 Author and Dead fan Michael Benson has written a history of the Grateful Dead, using a variety of resources including his own memories. It’s his contention that the Dead matter more than other musicians because they weren’t *just* musicians, but creators of a way of life and a different way of providing music to the public. His focus is less on names and dates than it is on the impact the Dead have had. From being the house band at Ken Kesey’s Acid Tests in the early ‘60s, where LSD was put into Kool-Aid and distributed, to the remaining members (several members have died through the years) giving a farewell tour in 2015, he intersperses short chapters of band history with essays on how the Dead changed American hippie culture.

As a Dead fan but not a Deadhead (one of my regrets is that I never got to a Dead concert), I found the book very interesting if a bit rambling at times. I enjoyed reading about how they wrote their songs, and the behind the scenes descriptions of what the concerts felt like to the performers who were tripping on LSD while they played. I never realized that Garcia and Mountain Girl didn’t marry until a long time after they had split. I still don’t know how they achieved their ability to play wonderfully together when they changed the songs up constantly- mid song- like folk songs with a jazz sensibility. A true fan probably knows all these things already, but it was really fun for a person who is a casual fan.

I received this book free from the Library Thing Early Reviewers program in return for a  fair review.

Neither of these things influenced my opinion.
Posted by Laurie Brown at 2:43 PM