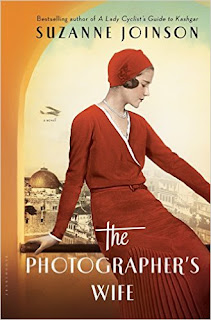 Eleanora Rasul is the photographer’s wife, an English woman who married the Arabian Khaled Rasul. Rasul is involved in trying to expose the bad things the English- who are ruling Jerusalem at the time- are doing; in secret, of course. But the book isn’t really about her; it’s mainly about Prudence Ashton, who, in 1920 when the story starts, is the eleven year old daughter of an architect who has plans to redesign Jerusalem in a more English manner, this area being at that point part of the British Empire. To make more accurate maps of the area, he has hired a pilot to take Eleanor up so she can take aerial photos- a first for the time. What he doesn’t realize is that the pilot, William Harrington, grew up with Eleanora and has always loved her. He hopes he can steal her away from her husband and back to England with him.

The story follows Prue later as an 18 year old bride to an abusive husband, and later still as the mother of a young son she is bringing up alone after fleeing her marriage. Harrington shows up in her life again and threatens to derail the precarious life she has created.

Everybody in the story has secrets, some more closely guarded than others; some are sexual, some are political, some are psychological. Some are revealed right at the beginning while others do not come to light until the very end.

The novel has all the right components to make a great story. Political intrigue, love affairs, a mother in an asylum… it’s endless. But somehow it didn’t come together for me. I disliked many of the characters (like Prue’s lying, cheating, neglectful father); others I didn’t actively dislike but just couldn’t like them or even work up interest in them. These people are (mostly) not horrible, but they are all so wrapped up in themselves that they are the sort of folks that you just want to walk away from. I make an exception for Prue; I didn’t care for her a lot but her whole life is so awful that I give her a pass. The one person I genuinely liked- Prue’s language tutor- may have been partly responsible for some horrors. The political intrigue I was confused by a lot of the time, and while there is one gruesome episode, most of it takes place off screen. I really couldn’t wait to be done with the book, sadly.

Neither of these things influenced my review.
Posted by Laurie Brown at 12:14 PM