The Honeymoon, by Dinitia Smith. Other Press, 2016 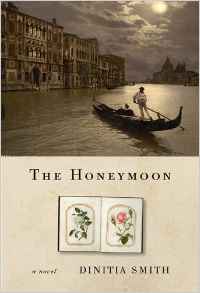 Dinitia Smith has done more than written a fictionalized biography of George Eliot; she’s recreated the woman and her world. Eliot- the pen name of Marian Evans, taken because woman authors were not taken seriously back then- lives and breathes in these pages.

The story is framed by what is happening in 1880, when Marian is supposed to be enjoying her honeymoon with John Cross in Venice. She’s not enjoying herself, though; Johnnie- who is twenty years younger than Marian- is behaving oddly, manic and not his usual caring and supportive self. During this time, Marian remembers her life, starting with her girlhood.

Eliot started life in a rural middle class family. Considered not to be marriage material because of her plain looks, she was encouraged in her studies as her father felt she could become a governess. Luck had it that she was given the run of a private library where she could indulge her joy in reading and learning. She falls in with free thinkers and polyamorous couples, and has a couple of relationships. But she want more; she wants a relationship where she is the primary, not an extra. Then she and George Lewes fall in love, and they have a happy, 26 year relationship until he dies. The laws would not allow them to marry, even though his wife had bourn multiple children to her lover. Lewes had allowed the children to bear his name- which meant he was aware of her adultery, considered a horrible thing, unlike his own relationship with Marian.

This relationship provided a goad for Marian to start earning real money. While she had done translating and was an editor of many works, she had not written her own pieces. Now she did, and became a best seller. Lewes was an author as well, but not nearly so popular as Marian, and they had to support not just themselves, and Lewes biological children, but his wife’s children by her lover, who contributed not a penny to their upkeep. Thankfully, Marian is able to do this, and put away enough money for the rest of her life, thanks to the management of John Cross. Cross is asked by Lewes to take care of Marian. Whether Lewes ever considered that it would be by marrying Marian, this is how Cross felt he could best do it. He truly loved Marian, although apparently not in a physical way. Smith presents him as possibly being gay, as well as having a hereditary form of unipolar mania.

I felt like I was living in Marian’s world. Smith truly inhabited Marian as a brilliant but insecure woman who was told from day one she was not marriage material because of her looks. I loved the passages describing how she worked and developed her novels before writing them- I’m always a sucker for descriptions of the artistic process. I’m ashamed to say I’ve not read Eliot’s work- something I’ll fix soon- but I was very impressed by her writing procedure and the amount of research that went into her novels.

The author also did a huge amount of research, going into mountains of letters written by and to Eliot and others. Some of her lines are lifted straight from Eliot’s own words. She also examined biographies not just of Eliot but of the people in her life, as well as reading Eliot’s work, some of which, while fiction, is also semi-autobiographical. It’s a solid story as well as an absorbing one.

The above is an affiliate link. If you click on it and buy something - anything- Amazon will give me a few cents.

Neither of these things influenced my opinion or review.
Posted by Laurie Brown at 1:30 PM