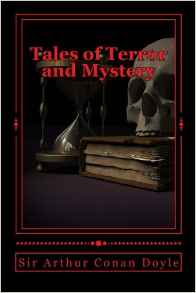 Sir Arthur Conan Doyle was a prolific writer, and his Sherlock Holmes stories, while the best known of his work, were only a fraction of what he wrote. This book gives us six tales of terror- mostly supernatural- and seven tales of mystery- all works of humankind.

Some of the mysteries have the feel of a Holmes story- in fact, he is obliquely referred to in two of them- but most don’t. “Terror of the Heights” made me think of Lovecraft, while “The New Catacomb” and “The Brazilian Cat” are both downright Poe-ish in character.

While none of these stories has the liveliness of the Holmes stories, they are well worth reading. Some people have put them down as being ‘pulp’ stories, but I don’t happen to think that’s an insult.

The above is an affiliate link. If you click through and buy something- anything- Amazon will give me a few cents. This in no way influenced my review.
Posted by Laurie Brown at 1:49 PM