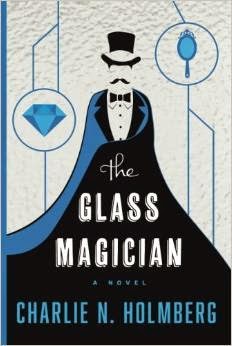 This is the second book in Holmberg’s trilogy about Ceony Twill, an apprentice magician. Set three months after the events in ‘The Paper Magician’, we find Ceony falling more in love with her teacher, Magician Emery Thane, feelings which she thinks he doesn’t reciprocate. We also find Grath Cobalt, partner to the evil Lira who Ceony froze, set on getting the secret of how she did the freeze out of Ceony so he can reverse it, and he’s willing to kill her family and friends to get it. Meanwhile, an Excisioner – a blood magician- is targeting magicians, seeking to increase his powers.

This book took a departure from ‘Paper Magician’ in that the first novel is told all from Ceony’s point of view, while ‘Glass Magician’ also shows Thane’s POV in one instance. ‘Glass Magician’ also has Ceony in a constant fret over how Thane feels about her- she manages to convince herself through much of the novel that she is.. unworthy.. somehow. While I realize she’s a teenager experiencing her first love, it seems odd in a person who is pretty darn resourceful and brave. I also found it annoying that she felt the entire problem with the two renegades was entirely her fault, and that only she should be at risk fixing it. This feeling leads her to rush into situations that lead to her needing rescue, rather than her solving things. In fact, it seemed like every female in this story ended up needing rescue. Ultimately she solves one of the problems on her own- in brilliant fashion- but the first part of the book made me feel like giving up on her.

Once again, it’s the author’s creation of a new kind of magic that impressed me the most. In the first book, it was how many ways paper could be enchanted even though it didn’t seem like a strong material. In this book, it’s glass that’s used in ways I’d never thought of. Of course I’ll read the third one- and hope that Ceony settles down some.

The above is an affiliate link. If you click through and buy something, Amazon will give me a few cents. This did not influence my review.
Posted by Laurie Brown at 4:52 PM