The Museum of Extraordinary Things, by Alice Hoffman. Scribner, 2014 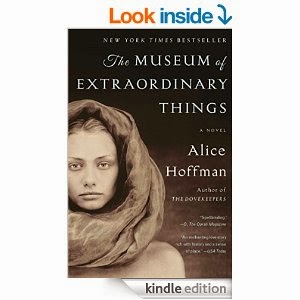 Hoffman writes books both for adults and for young adults; sometimes I’m not sure which audience a book is meant for- and I mean that as a good thing. This is one of those books.

The two main characters are both young- Coralie is 18 and Eddie not much older- and the book is partly coming of age tale. But, set mainly in 1911 New York, it also features the horrible conditions that factory workers had to deal with every day. The famous Triangle Shirtwaist fire stands so large in the story it is nearly a character itself. Eddie’s story is propelled by the labor conditions; a Russian Orthodox Jew who lost his mother and home in a Cossack attack on the village, he and his tailor father fled to America. Feeling his father is a coward, he runs away from the decrepit room they call home and finds his own way to earn a living, spending some time as an informal investigator, and eventually becoming a photographer.
Coralie is brought up by her father and his maid of all work, home schooled and sheltered from the world in the Museum. The museum houses exotic birds, man made hybrids created from parts of various species like those used by P.T. Barnum, and people who are visibly different from the average: an erudite wolf man completely covered with hair, conjoined twins, a girl born without arms, and the like. Coralie is at home with these people but not with everyday society. Coralie’s father has groomed her to be an exhibit in the Museum; she is born with webbed fingers, he trains her from early childhood to stay submerged in cold water for hours at a time. With a large tank and a silk & bamboo mermaid tail, she’s prime entertainment.

An accidental meeting leads to instant love for Eddie and Coralie, but her father has other plans for her. Not only is her father not the man she thinks he is, but he’s not a person to take no for an answer. And he’s got a lot to hide.

The story switches points of view frequently. Odd numbered chapters are about Coralie, first with a section in first person followed by a section in third person but concentrating on Coralie. Even numbered chapters are told from Eddie’s POV in first person, with a following section in third person. I didn’t have trouble with switching between Coralie and Eddie, but I did find switching from first to third person a  little jarring. There were some rough edges working the Triangle fire into the narrative. The author is known for her magical realism, and with a subject like a museum of the unusual, I thoroughly expected to find that here. But there is no real magic in this one; the exhibits are all easily explainable and the Seer is really basically a private investigator. While I liked this book and it’s definitely worth reading, it’s not one of Hoffman’s best.

The above is an affiliate link. If you click it and buy something, Amazon will give me a few cents. This in no way affected my review.