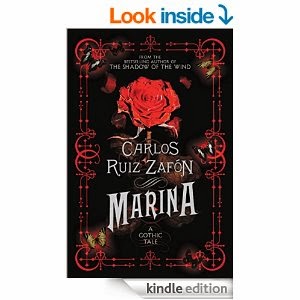 I fell in love with Carlos Ruiz Zafon’s writing when I read ‘The Shadow of the Wind” a few years ago, but I was not aware that he wrote young adult novels, too. This, the first book he wrote back in 1999 but just last year translated into English, is just as wonderful. It’s a tale of gothic horror as well as a coming of age tale, a tale of first love, a tale of death, and a tale of madness.

The story begins in 1980 with the 15 year old narrator being asked if he is Ocar Drai. He is, of course, and he’s been missing for seven days. Fifteen years on, he is ready to tell the story of what happened back then.

Oscar is a student at a boarding school in Barcelona. He is given to taking long walks after class and exploring. One day he finds himself in a run down area, in front of a presumably deserted mansion. But there is music coming from inside, and he enters. A gramophone is playing opera, and he finds a pocket watch on the table. Frightened by the sudden appearance of an old man, he flees, accidentally taking the pocket watch with him. He’s an honest young man, and despite his fear he goes back to the mansion to return the watch. Thus he enters the lives of German Blau and his teen daughter, Marina.

Marina says she has something to show Oscar, and takes him to a cemetery. A heavily veiled woman in black appears and lays a rose on a gravestone. Later they follow her to a collapsing greenhouse where they find not her but some large marionettes that become activated despite, supposedly, no one being there. They have entered the world of Eva Irinova, former singer, and it’s a horrible world of monsters.

What follows is horrifying tale of jealousy, bravery, and greed, but mostly of the desire humans have to cling to life and their wish for their loved ones to do so, too. Zafon gives us a mad scientist who has learned to cheat death but not decay. Zafon’s lush descriptions bring the old parts of Barcelona to life. The characters are incredibly vivid; the brave Inspector Florian, Eva’s friend and protector Claret, and the old doctor who knows what is going on-Dr. Shelley. Who has a daughter named Maria Shelley, which made me giggle a bit, given that there is a fair bit of Frankenstein-type things going on here. There is a lot of tension in the story; Oscar is given only a few times to relax and be happy. It’s one of those books that you want to stay up all night reading because you just can’t stand to wait to see what is going to happen next.

The above is an affiliate link. If you click it and buy something, Amazon will give me a few cents. This in no way affected my review.
Posted by Laurie Brown at 5:40 PM