The Ghost in the Electric Blue Suit, by Graham Joyce. Doubleday, 2013 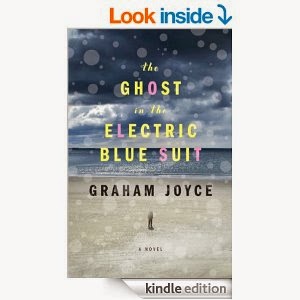 In mid-1970s England, David is a college student wishing to avoid working the summer as a construction site gopher for his step-father. He winds up at the same beach resort where his father had a heart attack and died when David was three. Hired on as a ‘greencoat’(for the uniforms they must wear) to man the various games & contests set up for the shabby resort’s working class guests and to perform chores in the theaters, he makes his first mistake almost instantly, sitting down at the table of Colin and Terri, part of the custodial crew. Colin is rude, crude, violent and doesn’t like to talk to people- and especially doesn’t want people talking to his beautiful young wife. But for some reason Colin takes David under his rather undesirable wing. This leads to a sort of friendship, and to another mistake- David goes to a racist meeting with Colin, not knowing where he was being taken. Which doesn’t go over well with certain others on the staff. Meanwhile, David starts having vivid hallucinations of a man with a rope and a small boy, hallucinations so real he follows them at one point. There is a love triangle- really more of a love pentagon, really.

Although Graham Joyce is known for his fantasy work, this book has little of the supernatural. While there is a stage magician, the only real magic is the psychic laundry woman. This is more of a coming of age book, with David making pretty much every mistake he can make. It’s also a look back at the end of an era, when the seaside resorts were on the way down, and the beginning of the Punk era. I had sympathy for David; young and more or less innocent, with few people telling him the truth. The characters aren’t particularly deep but they held my interest just fine; I couldn’t stop reading because I wanted to see how the whole thing untangled.

The above is an affiliate link. If you click through and buy something, Amazon will give me a few cents.This in no way affected my review.
Posted by Laurie Brown at 4:27 PM