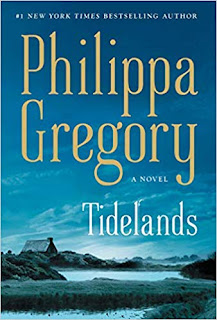 I really enjoyed “The Other Boleyn Girl”, so I was very happy to get a pre-release copy of ‘Tidelands’. I was disappointed I read it; I felt it wasn’t nearly as well written as TOBG was. It’s the first in a series, so there is a lot of stage setting to be done, and it was done well and in detail. But the pace is slow, although that may have been on purpose, to put the reader into the feeling of life for the poor in 1648.

In the Sussex tidelands, Alinor Reekie, a 27 year old herbalist and midwife lives in a shack right in the muck and mud. Her two children work for the biggest employer in the area, the farmer and owner of a tide-driven mill. Alinor has an odd status; her fisherman husband disappeared months ago, so she is not a widow but she has no man to support her. Her brother Ned runs the human powered ferry. They live in Dickensian poverty, but at least they have shelter and *some* food. This is during the time of the English Civil War, when Charles I was exiled on the Isle of Wight- nearby to where Alinor lives. Parliament was running the country, and Catholicism was outlawed. Royalists practiced their faith in secret, and plans were always afoot to restore Charles to the throne.

One night Alinor meets James as he flounders about in the tide flats. She leads him to the manor of Sir William. In thanks for that, he persuades Sir William to hire Alinor’s son, Rob, on as companion to his own son, to be educated by his side, giving him a chance to obtain a job inside. William also pays Alinor some money, in thanks for keeping some secrets. Alinor’s daughter, Alys, at 13 has turned into a beautiful young woman who is attracting the eye of the miller’s son. The family’s sudden good fortune- and Alinor’s profession- makes the area people jealous and suspicious that Alinor is a witch- a common fear in that time and place- the ruling Puritans really seem to have hated women. There are plots brewing and there are secrets that could lead to death.

For a book this long, there is a strange lack of character depth. Even Alinor is not really fleshed out. I felt sorry for her, but she never came to life for me. Alys comes off as just annoying, the son barely exists, and I ended up despising James in the end. My biggest complaint, however, was the ending. It all happens suddenly, after over 400 pages of slowness, and with a Deus ex machina appearing. It was very unsatisfying. I loved all the details of life on the tideflats- the setting itself came alive for me- but that didn’t make up for the other deficits. Only 4 stars.