Burn the Place: A Memoir, by Iliana Regan. Midway Books, 2019 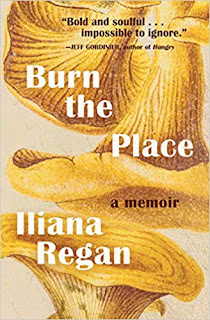 Iliana Regan is the owner of the Michelin Star restaurant “Elizabeth”, named for her sister who died in a jail holding cell. She was exposed to food a lot as a child- they lived on a farm and grew, foraged, baked, and preserved most of their food, but until the point her mother rebelled at having to do all that and they moved to a city. Oh, and they also helped out in Regan’s grandmother’s restaurant, too. Little wonder her mother got exhausted! But Regan loved working with food. When she grew up, she worked for other restaurant and worked in every station, learning the ropes inside and out. For a while, she ran a small restaurant out of her home, foraging the daily ingredients right in the city.

But the book isn’t all about her incredible food talent. As a child she struggled with gender identity. She also had a problem with alcoholism and addiction. She could not sustain a relationship. She was working in a male dominated profession. Being a lesbian didn’t make her any more acceptable. She battled all these things and came out a winner. She’s been married to Anna for several years now, and running a restaurant and a Japanese inspired pub.

The book was a little hard to read. While divided into four parts, the story is all over the place, in the present at one point and then skewing into the past. The writing is raw and blunt- descriptions of slaughtering animals, rampant drug taking, and alcohol binges. But it has something that held me. I do wish I’d learned some about her process of recipe creation; one of the most compelling things is that even as a small child she had a connection with food- when it was ripe, how to combine it, how to serve it up. She has an almost mystical connection with the earth and its edibles. Four stars.