The Song of the Jade Lily, by Kirsty Manning. William Morrow, 2019 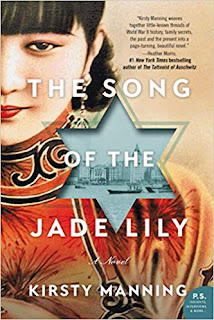 In 1938, on the day that will live in history as Kristallnacht, 12 year old Romy, her brothers, and her parents try to flee Austria as Nazi troops start rounding up Jews. One brother is shot for standing up for himself; the other is captured and taken away. Romy and her parents manage to make their way to a train station; they find they cannot flee into any European countries. Their only hope of escape is a boat to Shanghai, as China is still taking in refugees. On the boat, Romy becomes friends with Nina, whose parents die on board ship. The Bernfelds want to take Nina into their own shattered family, but her uncle, who cares nothing for her, takes her away. In Shanghai, the Bernfelds become friends with the Ho family, with Romy and Li becoming fast friends. Li becomes a beautiful singer, while Romy is intellectually gifted.

In 2016, Alexandra is returning to the Australian home of her grandparents, Romy and Wilhelm. She has a broken heart, and it is about to be broken more: Wilhelm is dying. He and Romy feel it’s time for Alexandra to know something of the family history, which has been kept from her so far. She knows that her mother was adopted by Wilhelm and Romy, and that she died in a car accident when Alexandra was very young. But she knows nothing of her mother’s origins, and Romy isn’t telling her that. So she sets out on an information gathering mission…in Shanghai.

I loved reading this book. The author paints pictures of Shanghai complete with scents and flavors. It’s rich in details. Shanghai is painted as an amazing place- the Paris of the East. And it’s not just the pretty side of it; this takes place during the horrors of the Japanese Occupation. I didn’t find Alexandra’s story completely absorbing, but Romy’s story sucked me in. Told in the now common format of duel timelines and narrators, the stories fill each other in. I was able to figure out what happened before the end, but not very far before. I had never heard about Jewish refugees in China before and that fascinated me. I loved the details of life; the food, the healing methods, the grim conditions in the town and especially in the hospital where Romy works with her father in Shanghai. Diary entries and letters from the war add dimension to the tale. Manning did a lot of research to write this novel, and it shows. Five stars.