Death of a New American, by Mariah Fredericks. Minotaur Books, 2019 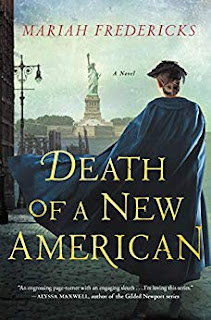 In Fredericks second in this historical mystery series, it’s 1912, and ladies maid Jane Prescott is accompanying her charge, Louise, to the Long Island mansion of the Bentleys. Louise is marrying William Tyler at his aunt and uncle’s home, and they are going early to get everything set up properly. Uncle Charles is the prosecutor notorious for going after the Black Hand, the Italian organized crime ring of the time. Because of this, and also because of the recent death of one of their children, his wife Alva is intensely worried about the children’s safety. She doesn’t want them outside, even with the armed guards patrolling the property, and the windows are shut and locked most of the time (although it is odd that, for all her worries about their safety, Alva spends very little time with the kids!). When the nanny, Sofia Bernardi, is murdered one night in the nursery, with the window left open and baby Freddy out of his crib, everyone’s minds assume it was an attempted kidnapping, or an attempt to kill the baby.

Jane sets out to solve the crime. Once again, she encounters journalist Michael Behan and her Marxist friend, Anna. She also has the assistance of 6 year old Mabel Tyler, who is precocious and smart. Along with the mystery, the author touches of woman’s suffrage, racism, and classism. Even Behan, who is supposed to be a good guy, shows a nasty bigoted side to himself. The sinking of the Titanic, and the loss of life, hangs as a shadow over the proceedings. Not to mention pre-wedding jitters on the part of Louise and William.

Despite the classism of the day, Jane is pretty much accepted as an equal by her employers and the other high class folks, and she seems to have an awful lot of spare time for a ladies maid, which made it hard to see this as taking place more than a hundred years ago. The story is very slow. The story is full of great historical detail, but, sadly, the characters never really come to life. Three and a half stars, if I could give that.