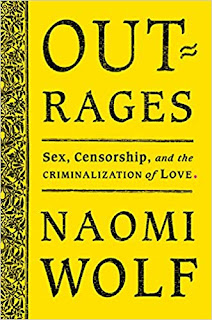 It wasn’t until well after I read this book that I found out how controversial it is. In gathering her facts, she misread court records. Where she saw the words “Death recorded” she took it to mean that the accused was hanged. In reality, that shorthand meant that the death sentence had been commuted, and the accused allowed to live. She also missed that in those days, ‘sodomy’ did not just apply to anal sex between males, but also applied to child abuse. There were probably no executions for consensual sex- but there *was* hard labor, as Oscar Wilde discovered.

Wolf writes that 1857 was a year when being gay became a crime, or became more of a crime. The laws against homosexuality had been on the books for years. It was the year when the Obscene Publications Act was enacted; it allowed the courts to seize books on the mere suspicion of being obscene- without defining obscenity. The Contagious Diseases Act was put in place in 1864. This act allowed the police to seize any woman force her to submit to a vaginal exam; if they felt she was infected, she was imprisoned. The act also allowed them to examine male anuses; if dilated, the man must be gay. So it was a time of anti-sex legislation.

The author uses the lives of a few gay men to demonstrate what life was like them, and the book does give you a feel for the era.

The book has been withdrawn by the publisher; I have no idea if Wolf will rewrite it, if it will be published as is, or if its publication will be canceled.