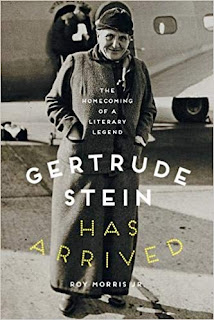 I tend to be interested in biographies of artists and writers of the early parts of the last century, so even though I’ve never managed to read one of her poems I requested this book. I may now attempt to read The Autobiography of Alice B. Toklas (written by Stein, not her life partner Toklas, she of the infamous brownies), after finding out that it’s a lot more readable than her earlier works. The fact that she was a self-declared genius seems, well, scary, but people really did find her talks and advice brilliant and interesting.

Although both were from the Bay Area, Stein and Toklas left America and lived in France- which was more welcoming to lesbian couples- for most of their lives. Here she collected art, wrote, and held salons for writers and artists. Many came to her for advice about their art or writing. It was when Stein published The Autobiography that she suddenly became known in America, and was asked to come over for a speaking tour. For over six months the duo went all over the US, to 37 cities. They had tea with Eleanor Roosevelt, met Charlie Chaplain and Mary Pickford (who wasn’t impressed with her), had a ride-along in a police car with a homicide detective, met with the Raven Society in Edger Allen Poe’s old room, visited several Civil War battlefields, had their first airplane ride, had Oysters Rockefeller in New Orleans- suddenly everyone loved this couple. She gave both literary and social issue speeches. The title comes from the “Gertrude Stein Has Arrived” message that was put on the New York Times reader sign.

If you know nothing about Stein, this is a great little biography. They don’t leave France until halfway through the book, so we get a good picture of their lives pre-lecture tour. Then we find out the things that she and Toklas saw, and the things that they said, while in the US. Stein came away with new admiration for the country she had so long disdained, stating that she was in love with the US now. I found the book a very interesting and fairly quick read; it’s full of celebrities like Scott Fitzgerald, Hemingway, and even Walter Cronkite interviewing her while in college! Five stars.