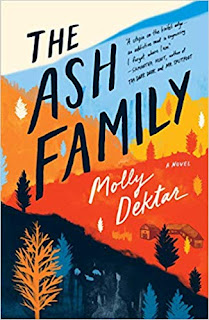 As someone who came of age in the late 60s/early 70s, I’ve always been fascinated with communes. Not fascinated enough to ever even think about joining one, but being torn between admiration for the hard work it took to make a successful one and astonishment at how people could fall for the blatant mind control that held others together. In this story, the author creates a cult that includes both those traits.

Nineteen year old Berie’s mother thinks she’s on a plane to college, but she’s not. Berie is waiting at a bus stop when an intriguing man named Bay strikes up a conversation with her, telling her about the farm in the North Carolina mountains he lives on with other like-minded individuals. The live in the ‘real world’, rather than the ‘fake world’ of most people. They share everything, there are no couples and no children, they live in poverty, and produce all their food from the land. She is welcome to visit, but the rule is: you can visit for three days and leave, or stay for the rest of your life. No other way. No one leaves; in fact, people who leave tend to not survive. After meeting the family and their charismatic leader, Dice, she throws in with them. They are, she feels, are just what she’s been looking for.

Of course there is culture shock. Her clothing is all taken away from her, and she is given clothing from the common pool, which is filthy. Renamed Harmony, she is immediately put to work herding the sheep, something she knows nothing about. She even has to sleep in the barn with them. The family only bathes once a week (if that), and they owe strict obedience to Dice. There is to be no asking of questions. There is no medical care. No one is to speak about their own past. And, as it turns out, things aren’t quite what she is told. They ‘live off the land’, but go into town to steal and go dumpster diving. They are for peace, but blow things up.

I loved parts of this story. The descriptions of the land, and the work they do, is written in loving, beautiful detail. It’s a very dark story, though. And in some places it really drags. I didn’t much care for Berie- frankly, she was boring- and certainly not for Dice and some of the other family members. There were a couple who I took a liking to- firstly Pear, the 60ish healer and bread baker. I would have liked to have read about how she, who would supposedly be older and wiser, got sucked into the family. I liked Berie’s ex-boyfriend. I liked Queen, another family member. I give it four stars because while I couldn’t put it down, there were some places where I really wished the story would move faster.