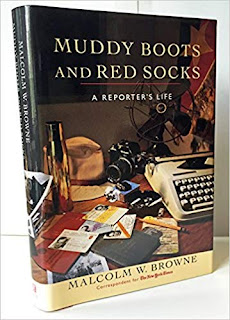 Malcolm Wilde Browne (Wilde because his grandmother was Oscar Wilde’s cousin) was a Pulitzer Prize winning journalist who covered wars all over, starting in Korea, and thence to Viet Nam (for which he won said Pulitzer), and then to the Middle East. War wasn’t all he covered, though; among other things, he was the editor of Discover magazine for a while. Along with being a memoir, political and philosophical musings are included- some I agreed with, some very much not.


Malcolm was a proponent of the type of journalism that got right into a situation instead of sitting back and being told what was acceptable to print, hence the ‘muddy boots’. In his quest for the truth, he ended up in three plane crashes, a lot of gun fire, and numerous tight situations. Because of his close ties to the Buddhist community in Viet Nam, he was on hand the day the monk doused himself in gasoline and set himself on fire. The resulting photos of the burning monk shocked the world. The American leaders did not think much of his reporting as he pointed out the ways American ‘aide’ was hurting Viet Nam. AP was impressed, though, he was *the* reporter for them during this time.


I have to admit, I wasn’t sure if I’d find a memoir about war journalism engrossing. After I was given the book (a dear friend gave me the book when I blogged about Malcolm dying; he was my cousin whom I’d only met once, when I was a teen) I’d dipped into it many times- mainly for his family and personal life- but never read it front to back. I finally did so and found it was as gripping as any novel. His writing flows and draws you along; I found it un-put-downable. I know more about my cousin now, and just as much more about the politics of war. Five stars.

the above is an affiliate link. IF you click through and buy something- anything- from Amazon, they will give me a few cents. This did not influence my review.

I won't claim that my review is unbiased, though. I mean, he was family!
Posted by Laurie Brown at 5:47 PM