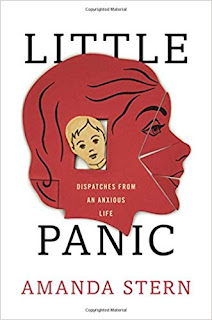 At 25, Amanda Stern was diagnosed with an anxiety disorder. This, after going through stress hell growing up, being wrongly diagnosed with a learning disorder, worrying that her mother would die if she didn’t keep an eye on her, and worrying that the world would fall apart at any second. Her life up until diagnosis and treatment was basically one long panic attack.


Shifting between childhood and being an adult, Stern tells a story that is hard to read. As someone with an anxiety disorder myself, I found myself going “Yes, yes, that’s how it was growing up” frequently. She had it much harder than I, though; I was able to lose the anxiety for periods, where I’m not sure she ever could. As if she didn’t have enough things to fear as a child, a boy vanished from her neighborhood when she was young, proving that horrible things did, indeed, happen to kids. Her mother had some kind of chronic illness that kept her in bed a lot and required lots of bottles of pills, and her father was remote, so even though her step-father was fairly attentive and caring Amanda’s illness sort of stayed under the radar as long as she wasn’t in trouble at school. Intelligent and articulate, Amanda has been able to have a career as an author of children’s books, which was a relief to read, as I found myself wondering how someone this crippled with panic could hold a job!


Stern has a sense of humor that she looks at the past through, which makes her story a little easier to read than it could have been. I do think the story could have been edited down some- it does drag in some places. It is the details, though, that make her story come to life. I appreciated reading a book that illuminated a lot of the things I’ve gone through in my own life! Four stars.

I received this book free from the Amazon Vine Program in return for an unbiased review. This did not influence my review.
Posted by Laurie Brown at 2:03 PM