A Death of No Importance, by Mariah Fredericks. Minotaur Books, 2018 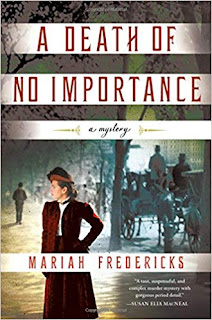 In 1910, Jane Prescott is hired as ladies maid by the Benchley family. They are new money, and in need of someone to tend to the needs of their two daughters. Louise, the elder, is awkward and not a beauty. Charlotte, the younger, is a demanding beauty who does not see why she does not get her every wish granted. And right now, her wish is to marry Norrie Newsome, handsome scion of a family with older wealth. Never mind that he is all but engaged to a girl of an Old Money family. She claims he will announce *their* engagement at the Christmas ball. This plan goes south badly when Jane discovers Newsome dead downstairs on the night of the ball.


There are a lot of people with motives to hurt the Newsome family, ranging from family members, the possibly jilted fiancé, anarchists, people hurt by the family business… Jane sets about trying to find the culprit, with some help by an eager reporter, Michael Behan. There are enough red herrings to make a decent fish n’ chips. Jane is uniquely positioned by being a servant, the person who is ‘invisible’- when you’re a servant, the upper class people you’re serving ignore you totally and will say the damnedest things in front of you like you aren’t even there.


There is a lot going on in this novel. I thought it would be a fairly frothy story, full of dress descriptions and sparkling events. And it is. But it also gets into historical events like the anarchist movement, horrible working conditions for the working class that featured such delights as little children working in the mines which collapsed with them inside, child sex abuse, the Triangle Shirtwaist fire, and more. The problem is that the historical bits aren’t worked well into the story. They sit out like sore thumbs, rather obviously put in to make the story more dramatic and less fluffy. This is the author’s first novel for adults; hopefully she’ll improve this aspect of her writing. And then there is a need to suspend disbelief on another aspect- no maid who was the ladies maid for two people, as well as running the house, would have the amount of time Jane finds for sleuthing. Four stars.

The above is an affiliate link. IF you click through and buy something- anything- from Amazon, I will get a few cents.

Neither of these things influenced my review.
Posted by Laurie Brown at 12:59 PM