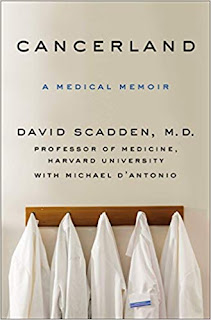 Dr. Scadden is an oncologist with several discoveries about cancer treatment under his belt. He is the co-founder of the Harvard Stem Cell Institute and one of the world’s leading experts on immunology as it applies to oncology. He, like most of us, has also encountered cancer up close and personal, in his own friends and family. And he’s treated numerous patients in his career.


He tells us of his history of cancer care and research. It’s been a long, hard trail to get to effective treatments. Cancer, it seems, is not one disease but many, many different disease, so there will never be a magic bullet that ‘cures cancer’. But stem cell research is finding cures for a number of cancers, the CRISPR gene allowing them to change the DNA of sick cells. These methods are more accurate than cutting huge amounts of the body away or the scorched earth methods of older chemotherapy. Reading the history of this research was fascinating. Near the end of the book the writing gets very technical, but it’s understandable by the average reader (okay, I had to read a few sentences twice, but I *managed* it!). One of the biggest problems in cancer research? Not enough funding, which is weird when you consider that EVERYONE knows people with cancer, if they don’t have it themselves! There is also the problem that there are people out there selling bogus ‘cures’ that lead patients away from treatments that could extend their lives. A really good book that I’d recommend to anyone interested in medical history or touched by cancer.

I received this book free from the Amazon Vine Program in return for an unbiased review. This did not influence my review.
Posted by Laurie Brown at 6:30 PM