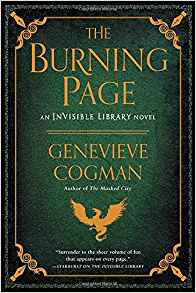 This is the third of the Invisible Library series (please let it be as series and not just a trilogy!), and in it, the Library itself is under attack. Portals are bursting into flame when opened, killing Librarians. Librarians are being called into the Library to try and solve this. Meanwhile, Irene and her assistant, Kai (who is a dragon in human form), are on probation after the events of book two, stuck with retrieval jobs that no one else wants. But then rouge Librarian Alberich turns out to be the cause of the attacks and everything changes. After numerous problems (a flat full of poisonous giant spiders, horrible giant wasps, werewolves with drugs, and more), Irene finds herself in Alberich’s territory, his own library in a twisted dimension, battling to save the Library.

This is the best of the books so far; not only have the characters grown, but Cogman has grown as a writer. There are side plots, new mysteries introduced, Irene is NOT a Mary Sue, and Irene is learning a lot more about the power of the Language. There are plot strands that still need to be tied up, such as the matter of Irene’s parents, what became of the Horse from book two, and just who built the Library, anyway? If you want a fast, fun read, try this series.

This in no way influenced my review.
Posted by Laurie Brown at 5:43 PM