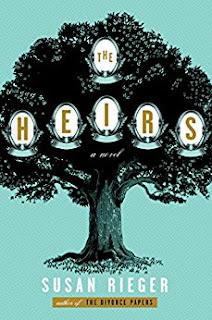 When Rupert Falkes, wealthy New York lawyer, dies, it leaves his family a bit at loose ends. His five sons- all middle aged men successful in their own fields- define themselves very strongly by their family relationships. Widow Eleanor reacts with calmness and proceeds to redecorate their home, which further upsets the boys- they take it as seeing every trace of their father vanish. Everyone is dealing with their loss, though, until yet another upsetting thing occurs: a woman contacts the estate, saying she has two sons by Rupert, and that they deserve a cut of the money- of which there is plenty. Suddenly, Rupert becomes a man they never really knew. Worse, Eleanor reacts calmly, which makes the boys think she knew about the other family all along and didn’t tell them. Rupert is beyond their reach, so they aim their anger at their mother.

The story twines between characters and through time, taking us through the lives and loves of not just Rupert and Eleanor, but of their sons, too. While Rupert and Eleanor seemed to their sons, to glide through life without a slip, there was a lot they never saw going on. All their lives turn out to be much more complex and, well, screwed up, than appears on the surface. These are people of old Eastern seaboard money (well, Rupert is not, having come to America as an orphan from England) and while money is not worried about, appearances are.

None of these people are totally bad (well, maybe the woman who says her sons are Rupert’s), so it was easy to read about them. Even the ones who did wretched things have good sides. I came to really like Eleanor, the calm center of the novel and of the family. The writing I found lovely; I could not put this novel down as something new was always turning up. In the end, we do not ever get the answer we (and the boys) want- but that’s okay. The journey itself is what’s important.

The above is an affiliate link. If you click through and buy something- anythin g- from Amazon, they will give me a few cents.

Neither of these things influenced my review.
Posted by Laurie Brown at 5:22 PM