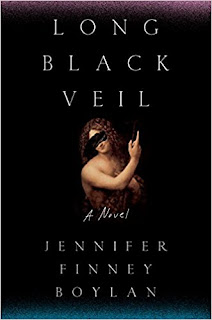 In 1980, a group of college friends (and the 10 year old brother of one) makes a foray into Eastern State Penitentiary, an abandoned and falling apart structure. Once they are in, they discover that someone has chained the door shut behind them. This isn’t quite the way they wanted to continue celebrating the event of the day before: the marriage of two of their number. It turns even worse when the recent bride disappears… and doesn’t get found, not for a long time.

Thirty five years later, a skeleton is found in the old prison, stuffed into a tunnel. This re-opens the police case; it’s now obvious it was a murder. Most of the group have alibis, but one, the widower, the one with the most obvious motive (her money), has no one to vouch for his whereabouts at the time of her death. One person cannot be questioned, having driven his car off an ocean cliff years ago.

Meanwhile, in a separate narrative, a woman named Judith has been keeping a secret from everyone: her friends, her son, her husband. It’s a big secret, and she fears losing everyone if it comes out. She’s the one person who can save the Casey, the widower, but can she make herself take that huge risk?

While we have a murder mystery for a framework, the story is really character driven. Judith is the one who comes most alive, but most of the others are well drawn and complex. The plot actually lost me near the end; I found myself going Wait, what? and having to go back and reread; I was having trouble keeping track of who was doing what. But it’s worth working through a little confusion; I ended up loving a lot of the story, as the secrets drop away one by one.

I received this book free in exchange for an impartial review.

neither of these things influenced my review.
Posted by Laurie Brown at 4:35 PM