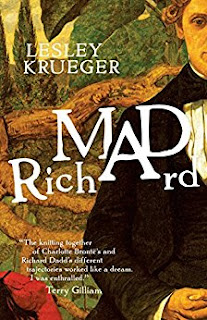 Mad Richard is Richard Dadd, an artist in the Victorian age. He was a real person, and he showed great promise. Which was good; his father had decided that was what Richard would do. Another son he directed to take over the pharmacy; another was consigned to manual labor. Richard’s father was a bit of a control freak where his children were concerned. We first meet Dadd in the Bethlem Royal Hospital-the infamous Bedlam asylum- in 1853, when he meets Charlotte Bronte, also, obviously, a real person. The meeting, however, is artistic license. Charlotte is visiting Bedlam- and some prisons and poor houses as well- to gather information for a ‘social issues’ novel she is thinking about writing. This short visit is what the novel hinges on.

The rest of the book alternates between Dadd’s life and Bronte’s. We follow Dadd from his childhood, through art school, and his association with The Clique, a small group of fellow artists who shared his ideals. All seems well, until his father badgers him into going with a rich patron to Egypt as the trip’s illustrator. It is on this trip, which Richard had not wanted to go on, that mental illness strikes.

Meanwhile, Bronte is immured in the rural home of her father. All her siblings are dead and she suffers from unrequited love; she wonders what the rest of her life will be like. Should she continue as she has and be lonely, or settle for a man who is agreeable but who she does not love?

Both Bronte’s and Dadd’s stories are interesting, but I never did figure out what really united them, other than that they both had overbearing fathers and were very creative. Bronte wrote about average people; Dadd painted fairies.

While I didn’t understand the pairing, the writing itself I found wonderful. It’s full of details of mid-1800’s middle class and rural life, as well as of the artistic life. Krueger lets us see into the minds of her protagonists. The story is populated with other Victorian creative types; Dickens, Augustus Egg, Elizabeth Gaskell, and Wilkie Collins are all part of the crew. Everything comes to life realistically under Krueger’s hand.